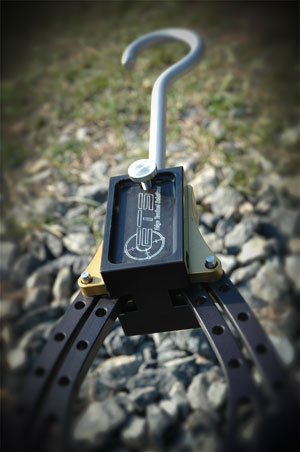 “The Berkeley Police Department Bomb Squad was contacted by Mike Gallant from Edge Tactical Solutions and offered the opportunity to field test their Block Accessory Tool System (BATS). Always interested in trying out new equipment, we readily agreed. Within days, the package arrived. I knew that we were receiving specialty tools for our Remotec HD-1J robot, but was surprised to see what appeared to be a R.A.F.T. kit on steroids.

The package contained two different sized probes (one appeared to be large enough to pop a tractor tire), one window breaker, one hook, one hook with razor edges and one rubber-coated “Flat Hook” tool used to open car door handles.

Following receipt of the BATS, the Berkeley Bomb Squad conducted joint training with the University of California Bomb Squad, also located in Berkeley. During this training day we only had time to test both hooks and the door opener. I was very impressed with how beefy the tools were. Also of note, each tool’s body was contoured to fit perfectly between the robot’s grippers. We were able to easily pick up, carry and drag items with the hook. The razor hook which utilizes Stanley Utility Knife blades, cut through various straps (think suicide vests) like butter. We found that the Flat Hook door opener was very easy to use.

In April, the Berkeley Bomb Squad conducted joint training with the Sonoma County Sheriff’s Department. At this training we tested the window breaker and the probes. Both tools were easy to use and quickly accomplished the job. We found that either probe worked well but preferred the larger one, as the diameter of the tube allowed more air to escape. Puncturing a tire in multiple places obviously caused the tire to deflate at a faster rate.

Although we have a R.A.F.T. kit that has served us fairly well, we found that it was easier to use the BATS because these tools were held by the grippers, as opposed to being mounted on a rail on the outside of them. This aided with tool placement by allowing our cameras to look straight down the middle of the tool. An added bonus to having the tool between the grippers was that we could put the tool down and continue working without having to bring the robot back up range to remove the tool.

Using our robot, Edge Tactical Solutions demonstrated their BATS for the group. The demonstration consisted of popping car tires, breaking automotive glass, opening car doors, picking up as well as dragging items with the hook and cutting straps using the razor hook. All tasks were accomplished in short order without any difficulty. Most of us knew what to expect from the demonstration, as many were familiar with the RAFT kit. Mike really wowed the crowd when he introduced a new product called the iRecon Camera System. This system consisted of a three-foot pole with the trademark gripper-held mounting system on one end and a high-resolution 10x optical magnification, remote controlled pan-tilt camera on the other.

After plugging the wiring harness into an existing port on the arm of the robot, we were able to use our robot’s pan/tilt controller to manipulate the camera. This accessory system allowed us to easily inspect the undercarriage of a sedan. Normally we would have had to remove our robot’s arm and flip it upside down to get the camera that low to the ground. The part that really excited me was that I could now conduct a thorough inspection of a vehicle’s interior. Before, I was limited to what my robot could see from the outside. Now, I can put the pole-mounted camera into the vehicle, look under the seats, and view the contents of center consoles and glove boxes, as well as items on the seats and floorboards.

We found the Edge Tactical guys to be extremely knowledgeable, as well as very interested in what kind of tools Bomb Techs are looking for.”